7 Tips for Removing Junk From Your Home 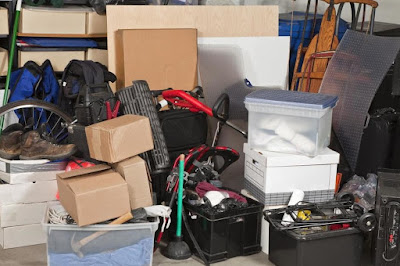 If you are starting your spring cleaning, you may already wish it was winter. After all, if it has been months, or a year (or longer) since you last really tried to get rid of the unwanted things residing in your home, spring can easily turn into anyone's least favorite season.

So if your house is beginning to resemble the inside of a garbage can, or your backyard looks like a junkyard, try these strategies for removing the unwanted stuff from your home.

Set goals. It might not be practical to tackle all the clutter throughout your home, or even an entire room, depending on the severity of your situation and what your energy level is. So don't even try. Just determine what you want to attempt.

Cecilia Anderson, a professional organizer based in the District of Columbia, says you might decide your goal is "to get rid of 40 percent of the contents of the garage. Or you could ... limit family keepsakes to four bankers' boxes' worth of space in the basement."

(Bankers' boxes, for those who don't know, are thick cardboard boxes with lids and side slits for handles.)

Having guidelines will speed up the process, she says. Plus, Anderson says, "If you start with some low-hanging fruit, it will get easier to make decisions confidently."

Throw away all garbage. If you have rooms crammed with clutter, you probably have items that can be immediately ferried to the garbage can without giving it a second thought. Maybe there's an empty bag of chips lying around (you know, real garbage), or some empty shoe boxes you kept, thinking you might store something in them one day. Get rid of them. Make getting rid of trash one of the first things you do, advises Felice Cohen, a professional organizer based in New York City.


"This lightens the load quickly," she says.

Identify what you want to get rid of. If you can, at the start of your junk-removal process, put everything in one area, Cohen says. If moving everything to one area isn't practical, she suggests labeling the items so you know what will eventually be going to charity or what you plan to sell and so on.

Set a timer. This doesn't have to be an all-day affair. If you want to work in small doses, Cohen suggests setting a timer or planning to fill up a certain number of boxes, echoing Anderson's advice about setting goals and guidelines. It'll keep you from getting overwhelmed, Cohen says.

Know who will be getting your junk. That is, if you're going to start writing your junk-removal story, try to have your happy ending already planned. In other words, where is all this stuff going to go, if not to another part of your home? You have several possible exit doors to consider, according to Cohen.

Hire a professional junk remover. There are plenty of them out there, like 1-800-Got-Junk and Junk King.

"For a fee, they will come and take the stuff away," Cohen says. "That's the quickest way to do it, but it's not cheap."

Have a garage sale. But Cohen recommends you think long and hard about that before committing.

"A garage sale takes a lot of effort, and the payoff isn't always worth it," she says. "Shoppers come looking for a bargain, and you won't make that much money, and most likely you'll end up either bringing it back into the house or donating it."

Read Full Article Here: 7 Tips for Removing Junk From Your Home
Posted by Dumpster Local at 7:20 AM No comments: